Getting started with react-redux

Redux is described as a predictable state container for JS Apps (in the docs) and a few more features. What we need to realize is that it gives a single source of truth for our JavaScript applications. Instead of saving our global states in multiple places, we manage them in a centralized location. That is it! Let's jump.

The source code for this article can be found here.

It is this redux architecture we need to understand. After that, it is how to accomplish it in reactjs way.

These are the main players we need to know, we need to understand. Next, we will use the react-redux library to accomplish this.

Instead of directly jumping into code, let's see what things we need to do.
Ok, that seems like a lot but it is not. The code is less, but yes we need to make sure to follow these steps. That is why it looks complex.
To make things more clear, I will create multiple files for actions, states, and reduces but instead one can follow the duck pattern to make everything in a single file.
Note that using the redux toolkit can simplify this further. However, I do not use it in this article because I feel that when starting this gives a clear picture.

It is the same counter application with increment and decrement buttons.

I use the create-react-app for this.
Our final file structure will look like this. 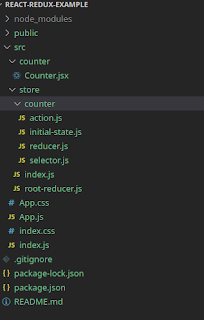 We need to wrap the App with Provider in index.js so that the redux store is available in the whole application. (index.js)

We are counting, hence we have stored counter property. (store/counter/initial-state.js)

We define two actions to increment and decrement the counter. (store/counter/action.js)

It is reducer who changes the store by acting according to an action. (store/counter/reducer.js)

We define a separate select as well. This will remove any duplicate codes in selections. (store/counter/selector.js)

Instead of having reducers inside the store, it will be better to create a single reducer by combining all. (store/root-reducer.js)

Finally, the store itself. (store/index.js)

And next, our Counter component that uses the store. (counter/Counter.jsx)
That is it! run and see how it works.

Not really. It is somewhat misleading if we think this is the redux architecture as in real-world applications we need to access the backend. Front-end requests will go to the backend to save/fetch data and store it in the store. Let's do it in the next article.