D of the SOLID principle is Dependency Inversion Principle also known as DIP.

This is one of those very powerful principle to build highly-decoupled well structured software.

What is Dependency Inversion Principle?


Depend on abstractions, not on concretions. 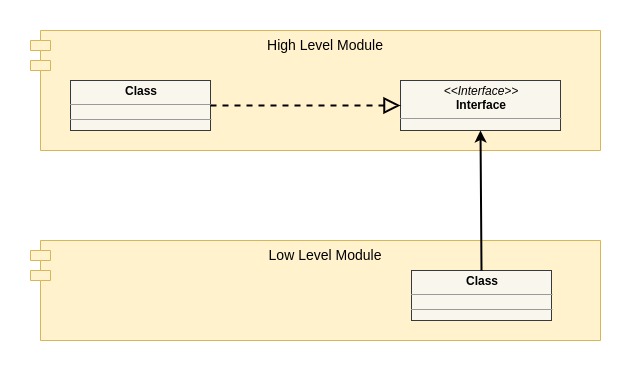 The idea here is that high-level module should not depend on low-level modules. Both should only depend on the abstraction. With that you can see that is changes the direction of the dependency.

Basically, loose coupling is the Dependency Inversion Principle's goal, and there are at least two ways to achieve it.

A bit of Dependency Injection

Dependency injection is a technique in which an object receives other objects that it depends on.

Dependency Injection or DI is a way of implementing DIP. You are injecting your dependencies through constructor, setters, properties.
Inversion of Control (IoC) frameworks like Spring uses this technique to manage dependencies. However it is just another tool we use.


Here we are going to write a file.

Have a look at the arrow in this new design. You can see that with  this design we have inverted the direction. Now low-level dependency is directing towards high-level.

If you like to have more flexible design, you can separate abstractions further by putting them in separate modules. However this needs to maintain separate package structure.
High-level  --> api <-- low-level