Let's see a picture of a software installation.

It is a web of libraries. Now imagine we need to uninstall our software. Will it remove it's dependencies properly. Will that have an impact on other software? How do we install another version? What if you need to main multiple computers with this same setup?

There are many questions though we can somehow solve. Imagine time, energy we spend on these. Is it worth?

Lets say we want install MySQL as the database. Why do we need to spend lot of time for that when our main task is something else. These are reasons we need to find other way to software distribution.

What are the solutions

Docker is a command line program. A background daemon. Docker simplify container creation. Docker is a tool for container simplification. We only need to give few instructions. Then Docker daemon handle all the heavy work for us.

You can refer the official guide for the Docker installation. For example, for ubuntu https://docs.docker.com/install/linux/docker-ce/ubuntu/.
Make sure Docker is running.

Docker officially has a hello-world image. Let's run it. 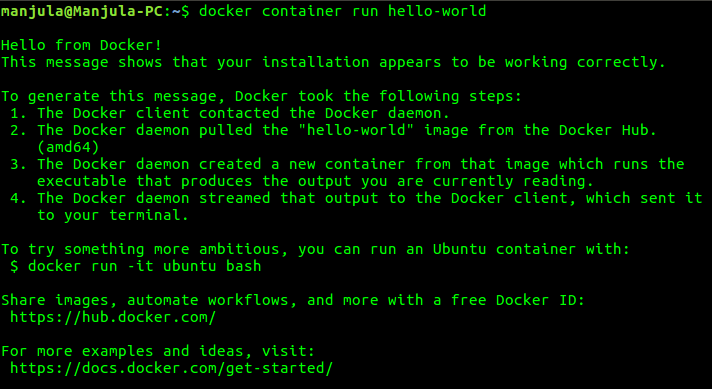